If You're Digging an Endless Ditch, Bill Schulz is Your Best Friend 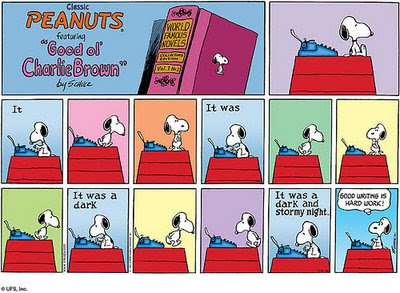 Good writing is hard work. Am I the only one who once thought it would be easier?

When I was young, and realized I had some talent, I think there was a feeling of inevitability about success, about good writing. I would read a lot, and practice writing, and there it would be: a bit of great writing of my own.

Yet the longer I live, the more I realize how much work is required. The craft seems to get more complex as we go along, rather than simpler. Revise and edit, and then revise and edit again... It's one hefty ditch we have to dig. And sometimes it feels like we're digging with a spoon.

I think I've known for years that perseverence is often just as important as talent. You need talent, but it won't take you anywhere without hard work. And yet the sheer weight of that work as you progress... you want to be a published novelist? It's going to take effort. Effort on effort on effort.

Doggedness is so important. Not just to study the craft, not just to write day after day. But to face rejection and continue. To face critique and step up to it only to face critique again. And again. Because an agent is going to critique. And then an editor. A copyeditor. Reviewers. Readers. And you simply have to continue writing, digging, working.

And it's harder early on, when you are so uncertain of success (however you define success). How do you keep digging? 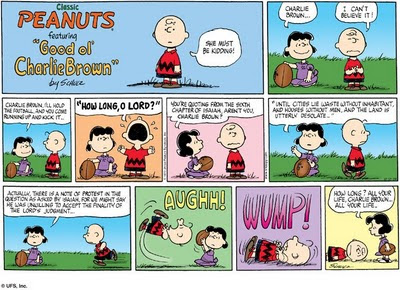 Good ol' Charlie Brown, right? There's something a little sad and funny about his determination, and yet there's a joy in his optimism, a sort of hope that is almost heroic. He's always there to take another kick at the ball, though chances at success are slim. All your life, Charlie Brown, all your life.

But he's dogged. He's gonna keep pushing. If Charlie Brown had a ditch to dig, I have this feeling he wouldn't be stopped. Can anyone here picture Charlie Brown putting down the shovel? If there's one thing Charlie Brown won't do, it's quit.

What about you? How do you keep digging? What pushes you through to draft 27 despite everything standing in your way?
Posted by Bryan Russell at 10:11 AM

Email ThisBlogThis!Share to TwitterShare to FacebookShare to Pinterest
Labels: keepin' on

Dogged determination is something I've thankfully had most of my life, so that helps tremendously. Because, as you say, writing is an endless improvement process, with endless critiques (long after you've put the pen down).

Something I just realized recently, though, is how the world is moving as well. I'm not talking about the e-revolution here, although that is obviously occurring too. I mean a change in the form of the novel itself.

I read this passage recently, in Donald Maass' Writing the Breakout Novel:

In the long history of literature, the novel is a relatively recent development. It arose during the Enlightenment, flowered during Victorian times, and in more recent decades has shortened and grown more intimate in response to our faster pace of life and in reaction to the dehumanizing aspects of our times. The novel today has downsized, grown more direct and has made character supreme.

This was written in 2001, and I think the trend he was talking about has matured into a greater emphasis on first person POV, and even now a switch to present tense as more acceptable (even "prefered" by certain agents at a conference I recently attended). It's almost as if everything needs to feel immediate in order to have relevancy.

I'm not sure that I like this turn entirely (especially the present tense part), but it brought home to me that not only do we have to continue to strive in craft, but that part of that is because the craft is a moving target.

I love that you brought this up this way Bryan, especially considering you old avatar from the forums. The only way to guarantee failure is to give up, which, like Charlie, I don't ever intend to do.

This is a very inspiring article, Bryan. Nicely done.

So, yeah, I don't really have that dogged determination thingy. I need some of that. Where do you get that? K-mart? McDonalds?

I may have to settle for freaking out at the idea that I won't accomplish my goals that mean more to me than life itself, so I run screaming to the typewriter.....but some persistant positive habits sound more peaceful, if nothing else.

Whoops, forgot to change my picture.

In terms of doggedness for YOU, Bryan, you need to keep on because you are mega-talented, and you need to share that with the rest of us.

So, there you are.

I suppose I keep writing because it never occurs to me I'll need to get through draft 27.

But I'm one of the stubbornest people I know. When I start something, I tend to finish it. (Eventually.)

You're not the only one. This is something I've been thinking about lately. I started out with childish dreams and now I just have the knowledge that I have a lot to learn. But that's okay - there will be shovel in my hands for as long as it takes, and if I die before it happens, then they can pry the shovel out of my hands to bury me with.

I love the Literary Ace. He personifies my struggle in a lot of ways! (I am a huge Snoopy fan, too!)

I keep going because I can't NOT write. Despite periods of rejections and frustrations and self-doubt, I always return to the page. Always.

I am obscenely stubborn...that is what keeps me going. Plus I have more than a hint of perfectionistic compulsion that propels me into revision upon revision. Although sometimes it takes also talking myself down: "Take the pen out of your hand, you are slashing through most of the plot."

I love anything that has to do with a Charlie Brown reference. I loved Mr. Schutlz; he was all Charlie Brown till the day he died.

I agree though. I miss the days when I was seven and it just seemed that all I needed to do was pick up a pen and keep writing, pick up more books and keep reading, and the whole thing would just fall into place. How couldn't it? I was so in love with literature.

It definitely gets harder the further into the journey you go; such is life on the whole.