Actually, I don't think I have. But from some of the wonderful definitions yesterday, it's actually possible I might have. The protagonist in my fantasy story is at the end of that age range. Could it be YA?

What a weird thought. I, who know nothing of YA, might possibly have written one...

Except, in the end, I don't think I have. Character age... check. But style? tone? theme? and the intent of the story? I don't think so. The story doesn't, in any way, deal with teen experience. And certainly the language and style don't fit in with what some of the definitions yesterday suggested.

Yet perhaps this has always been one of my fears: a publisher will love my story, and want to publish it, but will want me to change the basic style and feel of the story to somehow suit a particular audience--to Harry Potterize it, in some sense.

Because I don't think I could do that.

Am I only one that thinks this sort of stuff? What about you? Do you ever fear the idea of a publisher's "popular version" of your story?
Posted by Bryan Russell at 8:05 AM 18 comments:

Email ThisBlogThis!Share to TwitterShare to FacebookShare to Pinterest
Labels: Perhaps I'm an old grump and all I need is a rocking chair on the porch and some chewin' tobacco

What Makes a Story into YA?

As I've admitted before, my YA knowledge is limited. But I've been thinking about it a little bit, wondering what it is. What is YA?

Certainly, this new designation has changed things in recent years. YA is IT in the marketplace these days, or so it seems. But what is this IT? Is it merely a matter of marketing? Or is there something more?

I know some of my readers here at The Alchemy of Writing are YA writers, so I'm hoping they'll chime in.

Just what is this genre? Or is it a genre, even, in any recognizable sense? Is it a marketing sping for particular works from a variety of genres, or something coherent in and of itself?

I've also read The Hunger Games, and here's where some of my confusion sets in. This is one of the big, hugely popular YA books, one of the vanguards of the form. And yet, having read it, I had trouble trying to determine what about it was YA... with the exception that the characters were young. Though, really, they often didn't even seem young. Whether you slap on the age as 17 or 27, I don't think there would have been much difference. The one exception, perhaps, was the confused and somewhat angsty who-do-I-like love triangle.

The book doesn't really deal with teen life, as it looks like now (or as it looked like in the past). What makes it YA? Is it simply that the characters are young, and the publisher is hoping to tap a youthful market? Do adult books scare teens, while slapping on a YA label makes it seem okay?

I read a blog the other day (I can't remember where), about a YA writer who hadn't read fiction since high-school, because adult fiction was dry. Yet, picking up a few YA books, they found their way back into reading fiction, and then writing it.

So: is YA somehow different? And, if so, what are the mysterious elements that make it different? In terms of the actual stories, what is that has fuelled the boom in YA? (If, of course, there is a YA...)
Posted by Bryan Russell at 12:14 PM 19 comments:

I’m invisible. Go on. Be bold or be hungry. Tech 29 slid the screen door back, slipped inside, and peered over the top of the table, but he was too short to reach the food with the incredible smell. He grabbed a shiny green cylinder and popped it open.

The alien pulled off his mask and took a swig. His cluster of eyes bugged out. Amazed, he swigged the rest. Fabulous, the most delicious stuff in the universe. Seconds later, his insides erupted, gas shot out of his mouth, and he shrieked just as cheers erupted from the game.

“Keisha, the quesadillas are getting cold,” the male local called.

“Okay,” a female local called back from another room. “I just want to finish this post.”

“Keisha, you better get off the internet.”

The male noticed Tech 29 and gripped the arm of the chair. His mouth fell open. More cheers and a roar from the crowd came from the game.

“There’s an alien in the dining room,” he said.

“There’s an alien from outer space in here and he’s trying to get the quesadillas.”

“Terrell, you’re so full of bull. You’re the king of bull.”

The male’s voice rose. “I’m telling you, there’s an alien in here. He’s three or four feet high with a big head and a bunch of eyes and he’s got a Mountain Dew. He just belched. Now he’s stealing the Doritos!”

Tech 29 couldn’t understand the local’s words, but he understood the meaning. His camouflage wasn’t working. He could sense the man’s excitement and greed. Somehow the local wanted to profit off him and one-up his wife for all time. Suddenly the local crept around the table, hunched down with his arms spread wide, and angled in front of the door.

“Hey, little alien guy,” the local said. “You hungry? You want some ice cream? I got Rocky Road. I got pistachio, too, and it’s green just like you. I got barbecue ribs and cold shrimp and potato salad and potato chips and lemon cake and cheesecake. You like those Doritos? Take some more. Take the whole bag. Why don’t you have a seat and I’ll bring you a nice big bowl of ice cream.”

The local was going to grab his arm. Tech 29 skittered into the condominium, looking for a way out, but the dark hall didn’t feel like it connected to the outdoors. The local pounded after him. When the hall ended, the alien rushed into a narrow room with smooth blue tiles and slammed the door.

A key rattled in the knob.

“Okay, so where’s this famous alien?” the female said.

The male laughed. “I locked him in the bathroom.”
Posted by Bryan Russell at 8:00 AM 7 comments: 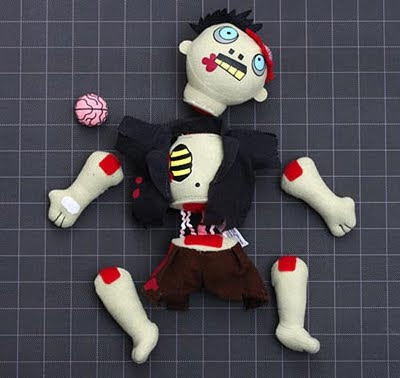 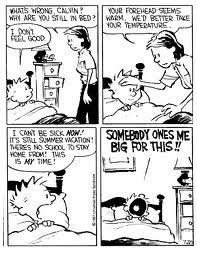 (From the great Bill Watterson)
Posted by Bryan Russell at 2:04 PM 18 comments:

Sometimes Them Words Is Hard