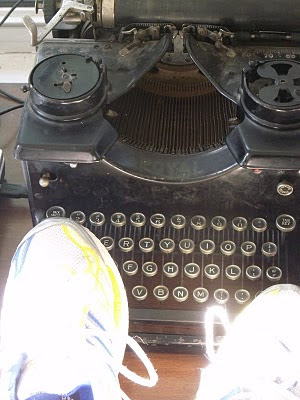 So the Rejectionist has a post about perseverence, and she uses a wonderful running metaphor to help make her point. I love running; I love writing. A confuence! I extended the metaphor a little (in comment 3 on that thread), and it got me thinking, not just about perseverence but about an act of sustained will.

Writing a novel is different than many acts of creation -- inspiration is important, and yet the process of writing a novel dwarfs any moment of inspiration. It takes a certain doggedness to complete a novel.

Is it any surprise that I'm a fan of extreme athletics? And by extreme I don't mean trying to ride a unicyle across a tightrope over Niagara Falls. By extreme, I mean extremely difficult. I'm fascinated by triathlons, marathons, the Tour de France. I've been watching the latter on tv. These crazy buggers spend three straight weeks racing this one event, riding hundreds of kilometres every day (thousands over the course of the whole race) through whatever conditions might arise on the roads - a brutal drought this year, as it happens. And they head up into the Alps and Pyrenees. On one day they rode up three mountains. Before they even got to the final climb. The last climb was the Col de Tourmalet. There were seven or eight kilometres of slow uphills... just to get to the bottom of the climb. The climb itself was 19 kilometres (12 miles) straight up a steep mountain. And they had to race it, the finish line at the top: to the winner go the spoils.

The sheer effort of this is mind-boggling, a ferocious act of will. Yet what struck me was not just the focus and determination of the riders on the day, as they struggled to pedal their bikes uphill against the weight of gravity and the request of physics in regards to round wheels (down, they want to go, down...). What struck me was what they all must have done to prepare for this. Only one man would win the race on the day (Andy Schleck), but they all had to get up the mountain. And this would be impossible without thousands of hours in the saddle, so to speak.

Is writing a novel much different? It's not a flash, a moment (even a long moment) of exerted will. It's a matter of sustained will. A slow accumulation, a build toward that final day of racing.

I run. There is something about it I find compelling. The difficulty of it. There are no easy steps, no breaks. A matter of sustained will. Each day, that act of will must put you on that road, and keep you on it. Yet it is the repetition of that act that's important. It's wonderful if I run four miles. But what if I don't go out again for a month? What did that four miles do for me? No, it's the ability to sustain that builds strength. Day after day, an accumulation of endurance and health. An accumulation of words on a single page, and then another, and another -- an accumulation of pages, of scenes and chapters.

You can't simply decide, out of the blue, to run a marathon in four hours. You would collapse. It is about moving from day to day with a goal in mind and in practice. It is about a sustained act of will.

The tramp of feet on cement. Step, step, Step, step, Step, step -- yes, I run with a bit of a limp. But that limp, that sense of the road, disappears when I get deep into a run -- and when I have trained, when my breathing, through long repetition, matches my stride. The road disappears beneath you. The sense of impact: Gone. You glide, you fly, you swim with every step. And yet that only comes with doggedness.

Writing is not so different. You must engage in the story through a sustained act of will, sinking yourself into it each day. Do it every day and sometimes the difficulty of each step, of each word, disappears. You lose yourself in the story. The world around you slips away, to be replaced by something strange and uniquely yours.

Will you win the race? Perhaps not, but the end will be in sight.
Posted by Bryan Russell at 9:47 AM

Email ThisBlogThis!Share to TwitterShare to FacebookShare to Pinterest
Labels: The Vultures, Writing

Bryan, I love this analogy and you've made me yearn to run again. I quit years ago because of the stress to my knees. But you run with a limp. And you just do it. Hmmm. Maybe I should get back out there and just do it.

You're so right about writing. It is definitely a sustained effort over a period of time. For me, I'm three months in and only 40% done. And my experience has been as you described.

I do love running. I try to be smart, as I have a few chronic joint injuries (a wrecked knee and a really wrecked ankle) - I've given up some activities (soccer, basketball) but I've persevered with running. But trying to be smart about it and stay aware of my limits. Which, shall we say, has not always been my strong suit. But I'm getting by.

And congrats on the book coming along!

I love the metaphor, even if I don't love running. I've always been more a weights girl. Okay, in recent years, more of a "What cake should I bake this time?" kind of girl, but that's besides the point.

Recently, I saw someone disparaging Stephen King for saying something along the lines of, "If you don't write a thousand words a day every day, you're not a writer." And while I understand that person's issue with this statement, I'm not sure that King actually meant one thousand words. I think that's a concrete expression of something larger and more diaphanous -- the will of the runner to get out of bed in the morning and put one foot in front of another, the will of the writer to get up and write today. If I don't write a thousand today, but I do write 300 damn good ones and I spend two hours editing and polishing another chapter or piece, that counts. Every day, I work on my writing.

It's focus. I think that's what we're talking about. Focus and determination. Pretty much everybody and their brother is "writing" a novel, has a great idea for a novel, etc. But how many are sitting down and writing something every day towards that particular end?

Sorry to be so long-winded. Your post hit a sore spot with me. I promise to be more upbeat in future, perhaps even downright jovial. ;)

Hey, R.S., I like cranky! :) Seriously, though, I love your comment, and I think it's dead on. You're right about King's saying: in an absolute and specific sense I'd quibble with it, but I think it's the spirit of the comment that's true. You don't actually have to specifically write 1000 words a day, but there is something to be said for writing regularly, for the actual process of writing. It's about not making excuses, I think, about the reality of progress over the satisfaction of merely hoping. Of doing, instead of "maybe tomorrow, or the next day, or someday..."

This is a wonderfully written essay, Bryan. It rang wise and true.

We do think that you too might have a marvelous story to tell, one that is your own! So if you can compose it in not more than few words, we would want to hear from you. Also, you stand a chance to get your story published on our site and win cash prize of USD 100.

“Then what are you waiting for? …put on your thinking cap and get writing. For registration and other information check - http://bit.ly/short-story-contest-2010

my sneakers are made of diamonds.

I do think my sneakers have a nice SPARKLE in the picture. Maybe they're made of diamonds...

I prefer hiking, but I see your point.

Great post! I am a runner too (although currently recuperating). I am half way through the first draft of my first novel and keep telling myself, I ran a marathon, I can do this... One of my favorite books ever is about writing and running, What I talk about when I talk about running by Haruki Murakami.

I love that book! I've convinced a few people to get that book. Admittedly, I'm sort of a Murakami fan. Well, more than sort of. :)