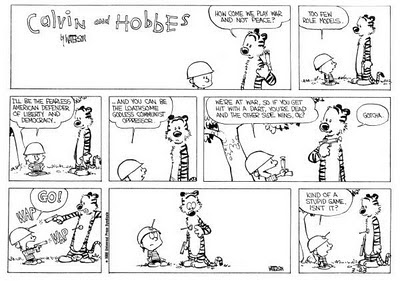 Gotta love Calvin and Hobbes. But this is not only funny! I have a point to make! I think. Maybe.

I was thinking this cartoon can serve as an apt description for certain stories I've read, and certain struggles I think a lot of us writers have during the drafting process. Conflict and tension... and resolution. It's nice to resolve things, to have that moment where the character overcomes the obstacle and succeeds. But sometimes success is dangerous. We resolve something... and the story stops. And then has to jerk forward into movement again.

I have a feeling this is what creates the sense of anti-climactic moments in a novel. Yay! We conquered! Okay. Um, what now? Calvin and Hobbes have shot each other... and, well, the game's sort of over. But in a novel it's all about reaching the end. It's about the pull, how one element drags the reader to the next. It's not about incidents, but about their interconnectedness.

So how do you avoid making your story too episodic? Anyone have any tricks, techniques or philosophies?

Part of what made me think of this is a book I read recently, a novel by a Czech writer, Radka Denemarkova, called Money from Hitler. This was an intense novel, a novel that was, in many senses, quite brutal. Partly for the content, the events, but partly just for that unrelenting intensity, the fevered pitch of it. Have you ever heard that old writing maxim "You have to be cruel to your characters"? Denemarkova, I think, has truly mastered this idea. And part of it has to do with how she handles conflicts and resolutions. There are resolutions (of a small scale) throughout the story, but almost never without an equal or greater conflict overwhelming it. There's satisfaction, but satisfaction always within a greater tension. The pull of this novel, from scene to scene, is unrelenting.

I'm not sure every novel could bear quite this level of intensity, like a tuning fork that never stops humming. But there's something in that idea of settling resolutions within greater moments of tension.

The problem, funnily enough, is that sometimes the resolutions are too resolute, too satisfying, too finished. Have you ever read a book where you reached a satisfying resolution at the end of a chapter and snapped the book shut... only to leave it sitting on the table for a few days? I've done that. The resolution was fine, quite satisfying. Too satisfying. I was happy. Tension resolved, nothing left hanging... now why was it that I have to go back and keep reading, again?

Sometimes the real resolution has to be kept just around the corner, almost unattainable. Close, but just out of reach. Gotta keep them grasping, turning those pages...

So, what do you think? What creates that pull for you in books? What drags you on to the very end? How do you approach pacing and flow in your own stuff? Hooking the reader is great... reeling them in can be even harder.
Posted by Bryan Russell at 12:20 PM

I've been thinking about this, but I'm afraid it has to be a pretty awful book if I *don't* read to the end. I'm a compulsive finisher - at least in my reading. ;-)

When I wrote my story, I didn't really dissect it as I went, but I insisted that every chapter had to have SOMETHING that was new, moved the plot forward, had resolution of one thing or brought in a new obstacle, and ended each chapter in a way that would pique the reader's curiosity to keep going on to the next chapter. Not a cliffhanger per se, but some little crumb that tempted investigation further. It seems to have worked out well since I've gotten nothing but positive feedback so far (save a grammar issue or passive voice here and there). One author said to remove parts that you know you, as a reader, would skim or skip, and that's been invaluable. I can't assume a reader WILL read a long paragraph or boring section just because I wrote it and it's in the book.

With my 1st novel I did have a lot of conflicts - and some feeling that the MC had won that round and went on to the next round.

The ending had four scenes to resolve all the conflicts.

The second novel I deliberately left one of the antagonists unaffected. Just so I could use him in a second book.

I think layering is the key to moving the story forward. Like working your way out of an onion, from the inside, each time a problem is resolved it reveals a larger problem/theme.

The themes/problems need to be woven together and hinted at in the beginning, so that the reader knows the stakes. But if they are elucidated or resolved too early, it is just as you say - Is This The End?

Bringing all those layers back together at the true end of the book is challenging, and something I struggle with. It's not just tying up loose ends or making sure all the details have some resolution, but rather finding a way to give that satisfying feeling, that we've consumed the whole onion (without the resulting digestive problems).

Nicely said, Susan. Made me think of Gunter Grass's memoir, Peeling the Onion, which was sort of operating on that metaphor of the layering of the onion.

That was a funny comic, and this is a good post. :)

I like what Susan said, too, although I might add that a really exciting book will have multiple onions operating simulateously. I've noticed alot of the books I enjoy have lots going on - all the characters have their backgrounds and life lines that are all proceeding along with the MC. Getting glimpses of those, or multiple story arcs - what is it, plot A, sub-plot B, sub-plot C, ect. makes a book really interesting.

Lovely blog you guys have here! I am a fellow author myself, and well, what I do is solve an issue quickly, in order to make way to the bigger ending issue. For example, there are books that put down an issue on chapter five, and the resolution only comes on chapter 15! If its not the main issue of the book, I like to solve it quickly, max 3 chapters later.